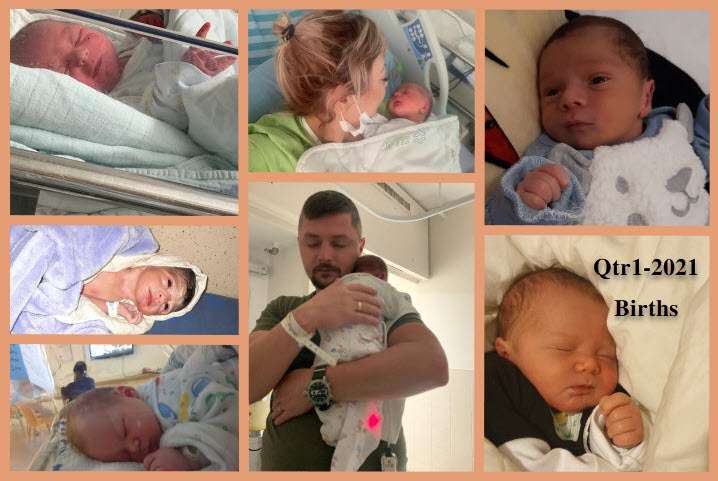 Despite the third lockdown at the beginning of this year, the work at A Future and A Hope has continued to be fruitful – in every sense of the word! We have continued with Zoom lectures to local groups, there have been several decisions for life, and as you can see by the photo heading this post – several precious babies have been born.

Several of you have written to ask how Liel is doing (see our December 2020 prayer request). Liel was born at 26 weeks and we know the Lord and your prayers made a difference in her little life. After spending two months in an incubator, she is finally home with her mother. Praise God!

Posttraumatic stress disorder (PTSD) can have serious consequences on people who have experienced or witnessed a traumatic event. Interestingly, most of the women who have come to us over the last two months have been relatively young and suffering from PTSD. Their stories are heartbreaking and inspiring. God has given them the courage to choose life despite harrowing circumstances.

Karen, in her mid-20’s, suffers from both PTSD and an eating disorder. When she came to us, pregnant with her second child, Karen was considering abortion due to difficult family and socio-economic circumstances. Her (now older) son suffers from a life-threatening allergy to dairy products. Karen is a victim of physical violence from her husband. He not only has attempted to kill her, but he has also threatened to kill their older son, now 5, and who was traumatized as a result. Karen made a brave decision for life and is now taking care of her two sons alone under very difficult economic circumstances.

Rosa, 21, was born into a Haredi orthodox family and experienced severe, sexual abuse during her formative years. Her family was quite unsupportive during the time that she was abused. In the end, she left them and started living on the streets. All too soon thereafter she began taking drugs, became involved in prostitution, and at the age of 17 became pregnant for the first time. She carried the child to term and placed him for adoption when she was allowed to live in a woman’s shelter, enabling her to get off the streets. However, a few months later, she returned to drugs and prostitution. After being clean from drugs and getting out of prostitution for nearly two years, she came to us for counseling – pregnant with her second child. Rosa gave birth two weeks ago and is now in the process of getting a government-sponsored apartment.

Alice is 28, a manic depressive who also suffers from PTSD. She had been repeatedly raped by her father over a long period of time and had already undergone an abortion when she became pregnant by him. She came to us during her second pregnancy, apprehensive and fearful. During the course of counseling, she decided not to abort and gave birth to a healthy son on March 31.

Tatiana is in her 20’s. She and her husband are both from families who were drug dealers, so it is no surprise that they also have a drug addiction background. Thankfully, they have both come to faith in their Messiah Yeshua not too long ago. Tatiana’s mother and step-father both died from drug overdoses and she has been exposed to drugs from the time she was born. After becoming pregnant, she was worried and was considering aborting the child. Both she and her husband chose life for their pre-born child, are receiving help from A Future and A Hope, and are attending a local congregation.

Billie is 23 and came to us during her first trimester of pregnancy. She had left home at the age of 17 after several difficult years of sexual abuse; however, she fell into prostitution and heavy drug use. She suffers from both manic depression and PTSD. Billie is working toward rehabilitation and is actively involved in a program to achieve that goal. After a long period of hesitation, she has decided to continue with her pregnancy and is genuinely looking forward to delivering in June.

Shilli is 32, a manic depressive who also suffers from PTSD. She was raped and sexually abused during her childhood. Shilli came to us for counseling during her fourth pregnancy; this time she has decided not to abort and to raise the child. In the past, she has been involved with prostitution and drugs but has been clean and off the streets over the last few years. She is due to deliver in May.

Karen, Rosa, Alice, Tatiana, Billie, and Shilli have all taken a course on birthing, breast-feeding, and child-rearing, given by a Doula who works with our organization. They are also receiving parenting training and ongoing family counseling from our counselors.

Although they have made decisions for life – they cannot do it alone. They need physical help, emotional counseling, and ultimately, a relationship with their heavenly Father.

The First Year of Life Program is a critical component in helping these and many other women coming to A Future and A Hope. Your support of this program helps in ways far beyond the material. In meeting their physical needs, each woman is reminded that she is not alone and that she is loved. Very often, your support helps them to find the courage to carry on, to not give up, and ultimately, helps to soften hard hearts. Please pray for strong support of this program so that we can continue to support the women who seek our help.

Our counselors need wisdom from above to know how to reach the women coming to them. While problems are similar on the surface, each situation is unique. Despite their training, they need God’s patience, wisdom, and grace, to provide the guidance each woman needs.

And finally, please pray for each of these women. In choosing life for their children, may they gain a glimpse into their Heavenly Father’s love for them, and ultimately yield to His love.

For more information on how you can support A Future and A Hope, visit our donations page.

As always, we are grateful to you for your support and prayers.

I would like to take this opportunity to wish you a blessed Easter as we rejoice in the resurrection of our Lord and Savior Yeshua.

Messiah is Risen! – He is Risen Indeed! – Hallelujah!

May you be blessed and be a blessing.